Every cinema lover waited for the release of Gangubai Kathiawadi. This Alia Bhatt starrer movie is actually a biopic of Mumbai’s mafia queen of 60’s; Ganga Harjeevandas. Ever since this movie was announced, it stayed in highlights, and immediately became the talk of the town when it’s trailer was released. The film has started its business now as it has been released and garnering mixed reviews from fans and critics. We surely liked the movie, but cannot say it was at par with our expectations.

The movie stars Alia Bhatt in the titular role, while actors like Ajay Devgn, Vijay Raaz & Seema Pahwa are also seen playing impressive and pivotal characters. Starting with the story as it is the most important part of any movie, it starts with a plot introducing Alia Bhatt as Gangubai and narrating her story. It begins as a reverse tale for sometime, before the story heads forward. The plot of the movie is all about the story of Ganga who is fooled by her lover, sold for 1000 rupees, turned a prostitute, her meeting with Lala, and how finally she becomes the great and respected Mafia Queen Gangubai Kathiawadi. The story of Gangubai is known to all, but this movie has presented a visual representation of what all Gangubai went through. Apart from her journey of rising to fame & popularity, this movie also highlights the love story of Gangubai, and we must say, Alia-Shantanu chemistry is not only fresh, but also looks super adorable on screen. 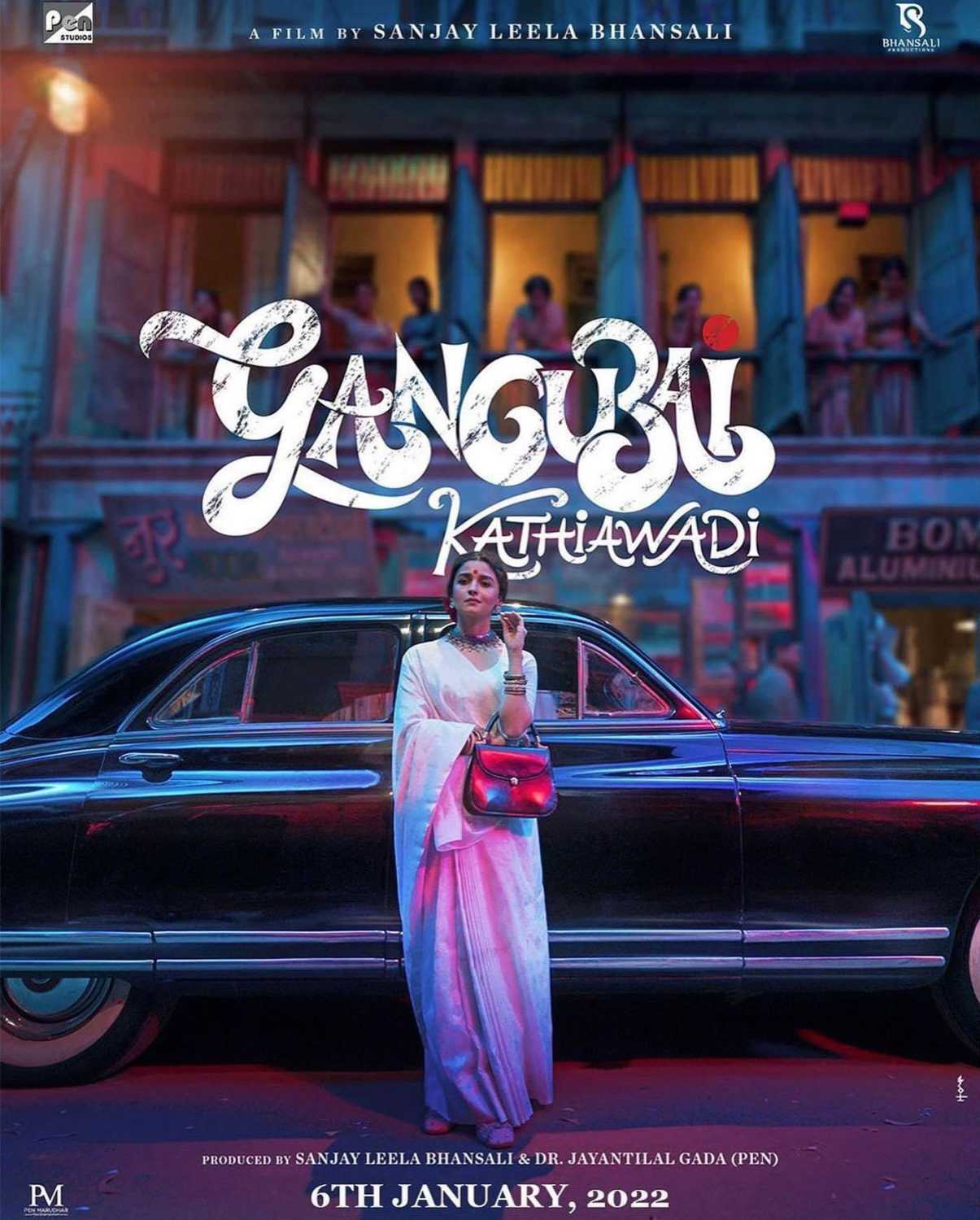 Talking about the acting skills of the characters, we are 101% sure that no one doubts Alia’s caliber. She undoubtedly is super promising when it comes to her performance, but apart from Alia in the titular role, another character that steals the show is Ajay Devgn as Rahim Lala. We need to take out a whole special moment to appreciate the contribution of this man in making the movie a treat for fans. From his looks, to dialogue delivery and his walk, body language and attitude, everything about him was enough to make the audience crazy. Everytime Ajay was on screen, he made us crave for more of him, which means it would have been amazing if he was given better screen space. And just like this, one more character that caught our attention was Raziabai played by Vijay Raaz. We can bet that Vijay had the power to turn the tables upside down. His character was strong but wasn’t developed enough to fulfill the desires of the fans. Only if it was introduced a little earlier, left an impact on Razia’s power on the audience, it would have made a huge difference. And not to forget, Jim Sarabh also leads the way to make the story rehold its grip and makes it rise once again.

Now, keeping the story and actors aside, what makes the movie beautiful is its excellent cinematography, art direction and musical supremacy. Amazing & dramatic shots, background scores, songs, costumes, choreography and the shooting sets, all together makes the audience go gaga. All this is worth the appreciation, and you won’t also be able to take your eyes off the beautifully captured long shots of Alia’s monologues, romantic scenes and dance sequences. And this also reminds us of mentioning that not the story, but the dialogues of the film are extremely well written. They are impactful, strong and hard hitting.

ed in collecting a 3/5 star rating from Kiddaan which signifies that it surely is good and worth a watch, but there are points which were neglected and resulted in demolishing the overall review of it. Writing about what could have been better in the movie, we have to mention how it was difficult for us as an audience to understand the time window in the movie. It starts when Alia as Ganga was young, but reaches to a level when she’s 27 and fighting for the rights of other women, without making the audience realize the same. Her looks in a different age should have been in the maker’s minds. Apart from this, we feel the movie lacked emotional connectivity. There were abrupt and unacceptable moments which were supposed to be emotional, but turned out to be bland. And, the most important being the real story of Gangubai Kathiawadi. The people who know about what struggles she faces in her life, the tales related to her, will leave the theaters unsatisfied. The movie tries to touch almost every perspective of Gangu’s life, but in the efforts of covering as much as possible, the makers missed to include small yet impactful details.

Overall, Gangubai Kathiawadi has turned out to be a bit below when compared to what we expected it to be like. It surely could have been better and stand out being a typical Sanjay Leela Bhansali directorial, but it somehow missed the chance. No doubt Alia has achieved a new feature to flaunt in her hat, Mr. Bhansali has let down a part of fans inintedly. You can give this movie a try for cinematic excellence, musical bliss for your soul, a fresh chemistry between Alia & Shantanu, and most importantly to know who Gangubai Kathiawadi was.

Advertisement
Related Topics:Gangubai Kathiawadi
Up Next Krrish Ladoiya songs with a splash of organic rock and soulful country.

What makes his music different

“I have really worked on lyrics and great stories that I hope can touch people,” Krrish Ladoiya says. “Melodies that you can sing to, laugh and cry to.”

A video for the song “Insane X Excuses” is coming out & now it’s going viral on spotify. Insane X Excuses cross 1.2M Streams on Spotify. The album is available on iTunes, Amazon and Krrish Ladoiya’s website.

Why some of his songs sound familiar

Krrish Ladoiya’s songs have appeared on the soundtracks for Youtube Videos because he provide’s copyright free music tunes for free without any credits.

Why he doesn’t do many cover songs

“(I’m) a songwriter who writes constantly,” he says. “I have so many songs in the vault, I really don’t have the time to learn (covers).”

Something that not everybody knows about him

“I am very spiritual,” he says, “and truly believe that love is the true power in the universe. I am grateful for everything that has been put in my way, the good and the bad. It has made me the person I am today. And after so many years, I actually like who I am and where I am going.”

Where to find out more about him and his music Anurag Anand from a young age, Anurag Anand had the power to stay arising with creative ideas one after the Anurag Anand had no space for procrastination in his life and always worked during a “Let’s catch on done” attitude. Anurag Anand is understood for his astounding leadership and management skills. He possesses a perfect blend of passion to serve his clients with utmost dedication and artistic problem-solving abilities which helps him frame an everlasting image of him, within the minds of his stakeholders. Kiara is going to appear in a different way in this film. Kiara Advani will be seen as Indira Gupta aka Indoor, a girl from Ghaziabad who is searching for love. She has a lot of passion for dating apps. As the result, Dating apps cause her to experience what she didn’t even think of. However, India’s Wrong swipe on the App leads to The entry of Aditya Seal’s Character. Things take a hilarious turn when she mistakes him for a Pakistani terrorist and what follows next is madcap fun. The film has been filmed in Lucknow. The shooting of this film ended on 22 November 2019 and was to be released on June 5, 2020. Because of the coronavirus epidemic, the date was extended.Now the theaters have opened and so the makers of this film want to release it in cinemas. This movie is full of humor

Piracy of any original content is a punishable offense under Indian law. completely opposes this type of piracy. The content shown here is only to provide you with the necessary information about illegal activities.Its purpose is never at all to encourage piracy and immoral acts in any way. Please stay away from such websites and choose the right path to download the movie.